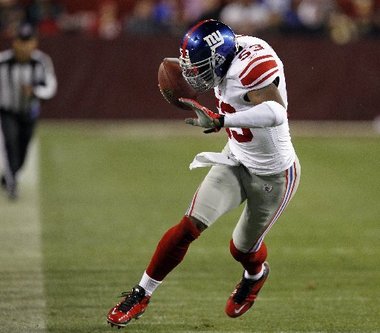 This is the mindset of Keith Bulluck when he looks at the prospects of the 2011 season; coming off ACL injury in 2009 Bulluck was able to return to the football field 7 months after surgery in 2010 and played 12 games without any set backs stemming from the injury (he did miss 3 games with turf toe).  Now Bulluck is looking for a return back to a full-time role and why not!

In a limited role (playing running downs) Bulluck was able to amass 31 tackles, 2 interceptions and 1 fumble recovery.  For someone only regulated to defending running plays he was able to show that he can still defend the pass.  In this era of players like Terrell Owens complaining Keith handled his situation like a professional.  Without a doubt this 11 year vet wanted more playing time but he understood that as long the team was winning he was more than willing to do what he could do to help the team win.  GM Jerry Reese acknowledged on Monday that Bulluck in a role where he was in and out of the game was steady for the Giants… In my opinion not many LBs would have been able to be as effective in such a limited role.

So after assessing his season Bulluck made his case for what his role should be in 2011 where ever he lands,

“I was able to get out there and I did make a few plays this year. There are probably a lot of full-time starters that didn’t have two interceptions all year”

“My history speaks for itself and my play, just to come out and show up to work every day, knowing what I was coming off of, should say a lot. … I was never a liability. I came on more toward the end of the year and made some plays. For me to come back off ACL surgery. Seven months off surgery and to practice every day and compete at this high level, for me personally, I’m very happy. Now, I can go into this offseason and start next season as the player I’ve always been and I’m very excited for that.”

The Giants without a doubt need a young dynamic play-making OLB as it has been a way too long since our last; Jessie Armstead! As of right now the prospects are not very promising; Clint Sintim will be recovering from ACL surgery and Gerris Wilkerson can’t seem to do any better than special teams so unless the Giants fall flat on their face during free agency I don’t see Wilkerson coming back.  Other than unproven Phillip Dillard there is not much in the Giants linebackers corp; so I would not be surprised if the Giants offer Bulluck a contract.

The key is will the Giants offer Bulluck  full-time role?

“I’m someone that needs to be on the field all the time. That’s just how I feel. So yeah, that’s the only way I’d play football next year.”

and if you (Bulluck) don’t get that…

“I’ll go buy a boat. I’ve played 11 years and I’m good financially and happy with the career I’ve had. Football doesn’t make me who I am.”