Sarah Palin just doesn’t get it!!!

This morning Palin made her first public comments concerning the shooting in Tuscon, Arizona where she condemned the shooting  and expressed her sympathy for the victims.  She then took the opportunity to attack the media and political pundits who quickly look to point blame for this tragic incident.  She called Loughner “apolitical” and said that heated debate is something that is not new to this country and it should not be blamed for this tragedy.

“There are those who claim political rhetoric is to blame for the despicable act of this deranged, apparently apolitical criminal. And they claim political debate has somehow gotten more heated just recently. But when was it less heated? Back in those “calm days” when political figures literally settled their differences with dueling pistols? In an ideal world all discourse would be civil and all disagreements cordial. But our Founding Fathers knew they weren’t designing a system for perfect men and women.”

Palin’s assertion that political debate has always been heated is simply wrong; we can go back to the Reagan years to see there is a stark difference in how the 2 parties operate.  Republicans and Democrats did have heated debates but they also knew how to govern; Tip O’Neill and Ronald Reagan would go back and forth on ideology but at the end of the day they had mutual respect for one another.

O’Neill called Reagan the most ignorant man who had ever occupied the White House. O’Neill also said that Reagan was “Herbert Hoover with a smile” and “a cheerleader for selfishness.” He also said that Reagan’s policies meant that his presidency was “one big Christmas party for the rich.” Privately, O’Neill and Reagan were always on cordial terms, or as Reagan himself put it in his memoirs, they were friends “after 6PM.”

The so-called debate that is occurring today is very much different; there is no respect.  In today’s debate the President’s citizenship is questioned by nutbags Conservatives while GOP leadership looks the other way.  Joe Wilson yells out during the State of The Union “You Lie!”… Where is the respect???

Palin also misses the mark with her belief that the EXTREME political rhetoric has no impact; in no way am I blaming Palin for the shooting but I believe we have to be careful when saying, ‘Take up our arms’ or  ‘Reload’. The use of images are also dangerous; like images of cross hairs from a scope pointed at taking out certain representatives.

Sarah Palin knows this, and that’s why she (or some staffer) immediately cleaned Palin’s site of the targeting districts map 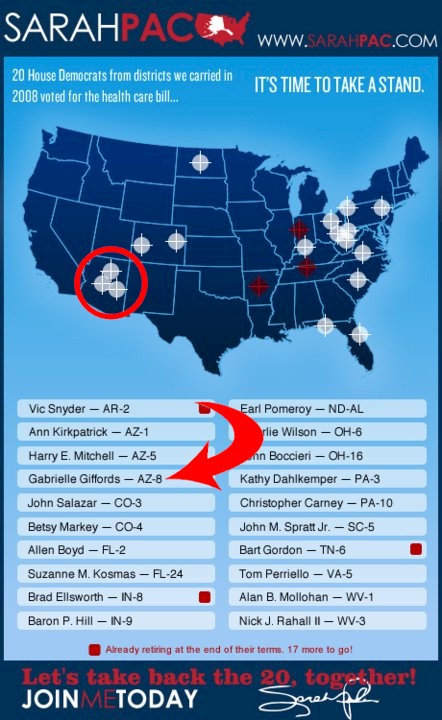 Instead of being a leader and acknowledge that the images or rhetoric are in bad taste and could possibly due damage; she decided to go on the attack and defend her views

Yes, our debates are full of passion, but we settle our political differences respectfully at the ballot box – as we did just two months ago, and as our Republic enables us to do again in the next election, and the next. That’s who we are as Americans and how we were meant to be. Public discourse and debate isn’t a sign of crisis, but of our enduring strength. It is part of why America is exceptional.

As I stated earlier Palin just doesn’t get it…