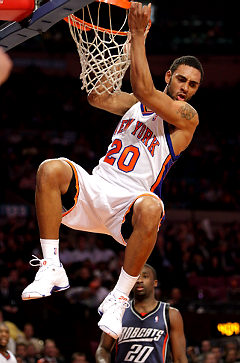 Anyone who has followed Knicks Chick knew that this video blog was coming; Welcome Back Jared Jeffries!!!

Knicks Chick is definitely a lot nicer in evaluating Jared Jeffries this time around; she is correct in stating that there are many in the media that are speaking highly of Jeffries as if he was the 2nd coming of Charles Oakley.  Jeffries is a nice player who in the right situation can help your team; and I think we might be seeing a pretty good fit for the Knicks right now.  But as Knicks Chick points out lets not act like JJ is the low post defender that is the missing piece.

If JJ can play 10 minutes a game and grab 5 boards while being some kind of a presence in the post I will be thrilled!!!

Hopefully we will not have to resort to the “Incentive” based contract idea Knicks Chick offered; if so I think it will be in JJ’s best interest if he retires right now, HAHA!!!

All in all I believe JJ will help more than hurt the Knicks this time around; with that said checkout the recent edition of Out of Bounds with Knicks Chick….

LOL, not sure if Knicks Chick meant it, but I believe she gave JJ a subliminal finger when counting what he doesn’t do.

I will say she makes a very good point about all the talk around the height we gave away in the Melo trade; people have to keep in mind that Mozgov was not a real defensive presence in the post or a menace on the boards.  Mozgov at best would be an offensive center that would happen to grab rebounds due to his height; I hated to see Mozgov go but let’s be real…