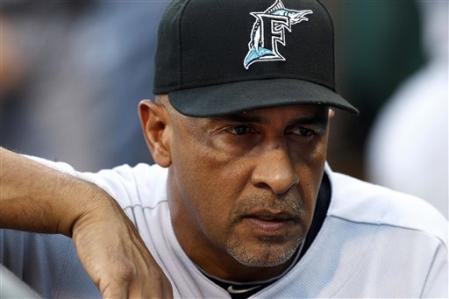 With the Florida Marlins struggling and free-falling to the bottom of the National League East with a 1-18 record in June; manager Edwin Rodriguez did the unthinkable when he suddenly resigned Sunday.  According to ownership Rodriguez was not in danger of losing his job and his resignation was apparently a surprise to ownership.

Last year on June 23rd the Marlins named Edwin Rodriguez as the 1st Puerto Rican-born manager in major league history; unfortunately he could not last at least 1 year.

Rodriguez quitting is something you just don’t do in sports!!

A reputation like quitting is something that can follow for the rest of your career; who can forget when Scottie Pippen refused to go back into the game when the final play was not called for him.  Even though the Marlins were struggling Rodriguez should have stuck it out; let the Marlins fire you.  At least then no one would ever challenge his mental.

Being the 1st Puerto Rican-born manager comes with responsibility, could you imagine if Frank Robinson (1st Black Manager in Baseball) would have quit?

Hopefully Rodriguez quitting does not have a negative affect on future Puerto Rican-born players with aspirations of managing when their careers are over; as for Rodriguez if he has any future ideas of managing I think he will find it difficult to get another shot.  He had a chance to lead the Marlins into a new era as they would have been moving into a new stadium next season, this will be an exciting time for the Marlins but now Rodriguez will miss out on that.  They have great young talent poised to have an impact in the NL East, good luck finding a new job Edwin Rodriguez!!