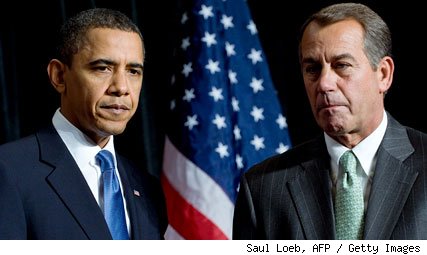 Once again Republicans have basically walked out of discussions concerning reducing the deficit and raising the debt ceiling; this time instead of it being Eric Cantor this time it’s Speaker Boehner.  Pres Obama in latest talks offered Speaker Boehner $1 Trillion in cuts plus $650 Billion more in cuts to Medicare, Medicaid, Social Security; this latest offer was more “Generous” than what the Gang-Of-6 plan was offering.

With this latest walkout the president has asked Congressional Leaders to show up to the White House 11am tomorrow morning and that everyone should come with some kind of plan to avoid default.  Obama indicating that we have reached a point where the debt ceiling HAS to be raised now through 2012 and that talks would continue after debt ceiling is raised on reducing the deficit.

If Pres Obama manages to get a clean vote raising the debt ceiling (meaning no stipulations for the raise) he may have pulled off one of the greatest bluffs ever.  Many Republicans (Tea Party kats including Rand Paul) ran on the platform that they will not raise the debt ceiling without significant cuts to the deficit.  If the debt ceiling is raised with specific reductions agreed upon, Republicans will lose what leverage they had in this fight.  The GOP Congressional Leadership should have challenged the president and taken him up on his offer on the cuts and entitlement reforms.  1st Republicans turned down an initial grand bargain deal that would have had $4 Trillion cuts and possibly significant reforms to entitlement programs.  Instead Republicans declined the deal because it included eliminating many Corporate Tax Loopholes that would have raised revenue.

And now Republicans are rejecting an offer by the president that is more “Generous” than what the Gang-of-6 were proposing; WTF!  Most analyst agree that what the Gang-of-6 was offering was more than fair to the GOP an would have hurt the hardcore Liberal.

Instead Republicans want no parts of a balanced approach to reducing the deficit, they would prefer deficit reduction be done by hurting the middle class and poor.  Polls favor Pres Obama in this debate, #1 the American believe the debt ceiling should be raised and#2 they favor a balanced approach to reducing the deficit; meaning not only cutting spending but also raising revenue to reduce our national debt.

Republicans may have squandered a GREAT opportunity to not only reduce the deficit but also a chance to reform entitlements.  If the debt ceiling is raised with no stipulations, the momentum swings back in the favor of the president and the Democrats.  They can play hardball in defending Social Security, Medicare and Medicaid.

Hey Republicans, You Know You Done Fucked Up Now, You Know That, DONT YOU!!!!!