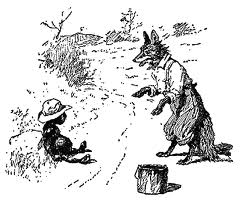 Republican Representative Doug Lamborn of Colorado just made a HUGE mistake; for whatever reason he decided that he would refer to President Obama as a ‘Tar Baby’….

“Even if some people say, ‘Well the Republicans should have done this or they should have done that,’ they will hold the president responsible. Now, I don’t even want to have to be associated with him. It’s like touching a tar baby and you get it, you’re stuck, and you’re a part of the problem now and you can’t get away,”

“I don’t want that to happen to us, but if it does or not, he’ll still get, properly so, the blame because his policies for four years will have failed the American people,”

Of course the immediate thought is that Lamborn had a Freudian slip in describing the 1st Black President; but after further review you have to also understand the term Tar Baby.  In Uncle Remus stories Br’er Fox creates a Tar Baby doll to trap Br’er Rabbit; the story has been used to describe “Sticky Situations’.

Tar Baby also carries a negative connotation in the Black Community and Lamborn chose the wrong words; does that mean he is a racist??

At this point in reading the text I don’t believe Lamborn was being racist plus I don’t know anything about his past that could suggest racism.  It was a dumb-ass move by Lamborn; you can’t compare a Black person to Tar Baby.

What I do know is that I learned something about Tar Baby tonight….