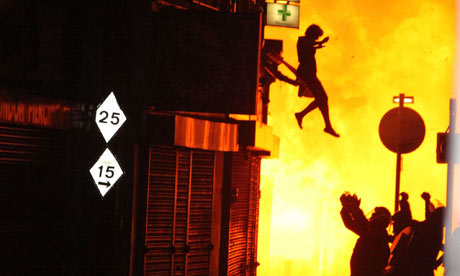 Over the past 3 days violence has ensued London as groups of young men have set parts of North London on fire; the events unfolded as 29 year-old Mark Duggan a father of 4 was shot and killed by police Saturday.  The area of North Tottenham was set a blaze as it seems the underprivileged are tired of what they perceived as unfair treatment from the police.  Over the past couple of days the area of North Tottenham has been described as gritty and tough, basically code words for the hood.

North Tottenham has a large African-Caribbean community that has experienced high levels of unemployment throughout the years; and I can only imagine that those numbers have increased with the tough worldwide economic situations since 2008.  And when times are bad there is more of a chance of the people rebelling; the shooting death of Mark Duggan could have been the final straw that broke the camel’s back and set off a backlash towards the establishment.  At this point you don’t know if people are rioting because of an injustice or if it’s just youth gone wild because they see a chance to act up; unfortunately innocent business owners in the area are suffering as their businesses are being looted and property being damaged.

So what exactly is 3 days of violence producing???

Too often we look at the people who destroy their own neighborhoods as ‘idiots’, “Why destroy your own neighborhood?” is the question that is often asked.  I tend to look at it as the ultimate sign of frustration being released for a group of people who feel they do not have the same opportunities as others to grow.  Whether they are right in thinking that way, the perception is there… and by the looks of what is going on in London the people of North Tottenham have had enough!!