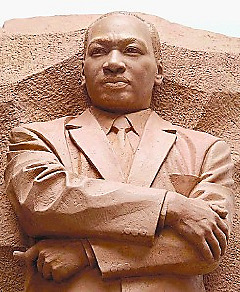 Due to Hurricane Irene the Martin Luther King Jr Memorial Dedication that was supposed to happen on August 28th; has been postponed indefinitely.  The hope was to celebrate this newly erected memorial on the 48th Anniversary of the “I Have a Dream” speech that took place on August 28th 1963 on the steps of the Lincoln Memorial.

Roland S. Martin has stated via Twitter that the following events are still scheduled as planned Friday and Saturday:

I am happy to hear that some of the events will still happen this weekend, we may not be able to fully celebrate on August 28th but that will not take away the great honor that has been bestowed on Dr King’s legacy.  I am hoping that I will be able to take a trip down to DC in the near future so that I can visit the MLK Memorial.  From what I have heard so far it is definitely a trip worth taking.
This delay will also give those Black Celebrities who were having a hard time choosing between the MLK Memorial Dedication and the 2011 MTV Music Awards, time to get their priorities straightened out.  SMH, get it together folks!!!
As always….