With the global economy falling apart and natural disasters hitting every part of the United States it was only inevitable before the people began displaying civil unrest.  Some will say the unrest started with the Tea Party and their rebellion against big government and over taxation.  The Tea Party have been a pain in the neck (especially for President Obama) but they got nothing on the AMISH!!!!

Yup, I said it the Amish be out in the streets taking no BS from anyone and taking no prisoners.  They be in slow motion on the block riding in their horse and buggy holding up all types of traffic.  Honk all you want, they have no cares… You and your modern machines have no impact on their lives; HAHA!!!

Of course I am only kidding but there is something to be said about the resolve of the Amish.  They have strong beliefs in their way of life and religion, so when Kentucky Police continually fined the local Amish for disobeying traffic laws that required they have bright orange traffic triangles on their vehicles… The Amish basically gave the police and Graves County their version of the middle finger.

“The men, who belong to the strict Old Order Swartzentruber Amish sect, object to the triangles because the bright color violates their modesty code. They said paying the fines would amount to complying with a law they believe violates their religious strictures.

You gotta respect these kats for not backing down, but seriously there was no way of reaching a compromise in this situation?

Instead 9 men were arrested and will have to spend time in jail, I mean is this even worth the trouble??  I have no idea the dollar amount of the fines, it would be interesting to compare the total amount of the fines to the total cost of holding The Notorious 9 in jail for 3 to 10 days.

I will say that the best thing about this story are the mug shots (story mentions 9 but there were only 8 mug shots), LOL!! 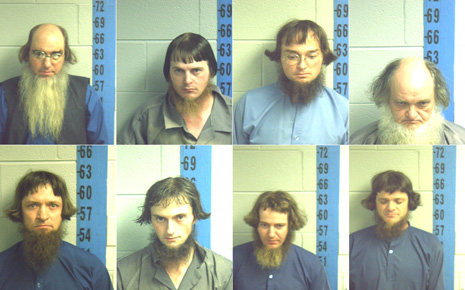