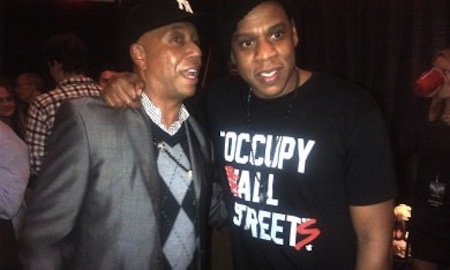 DAMN, that was quick….

WSJ (Wall Street Journal) is reporting that Jay-Z’s ‘Occupy All Streets’ shirts are no longer being sold online from Rocawear‘s website.  It looks like Jay-Z and Rocawear folded under the pressure from the scrutiny of their decision to profit off of the Occupy Wall Street (#OWS) movement.  I guess Hov decided if he couldn’t profit off of this then fuck it!

It’s possible that Jay-Z will re-launch the shirt with some of the profits going to Occupy Wall Street but at this point it seems unlikely as Rocawear has not released any statements about the removal of the shirts from their website.

Jay-Z is a shrewd businessman but he is not perfect, it just shows you have to be careful.  Jay/Rocawear are no small-time street vendors that no one cares about, the Occupy Wall Street movement is real and people are paying attention.

Also, this is a great example of the type of influence Jay-Z has over pop culture.  The moment he wore that ‘Occupy All Streets’ shirt he created an instant buzz; I can’t imagine what it’s to carry that much weight….