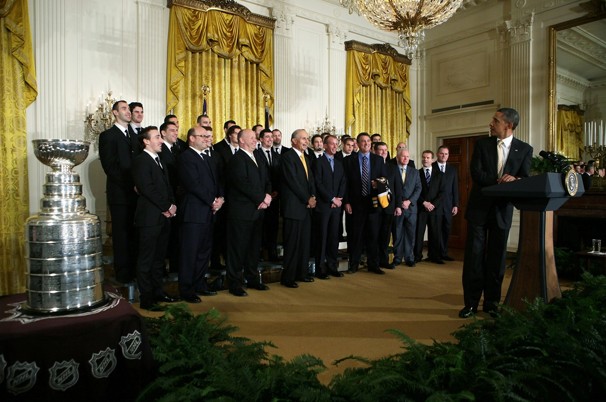 On Monday President Obama honored 2011 Stanley Cup Champions the Boston Bruins, this is a tradition that has gone on for years where the president will honor the champions in sports.  There is nothing political about this event, but that didn’t stop one particular Bruin from excluding himself from the celebration.

“I believe the Federal government has grown out of control, threatening the Rights, Liberties, and Property of the People.

“This is being done at the Executive, Legislative, and Judicial level. This is in direct opposition to the Constitution and the Founding Fathers vision for the Federal government.

“Because I believe this, today I exercised my right as a Free Citizen, and did not visit the White House. This was not about politics or party, as in my opinion both parties are responsible for the situation we are in as a country. This was about a choice I had to make as an INDIVIDUAL.

“This is the only public statement I will be making on this topic. TT”

Without a doubt Tim Thomas has the right as a “Free Citizen” to protest gov’t; this is why The United States of America is great.

BUT….  And you knew there will be one from me

As I give a slow unenthusiastic clap for Thomas and his right to protest, my only thought is that this is was a waste of time.  This is not a Tommie Smith and John Carlos 1968 Olympics protest moment; 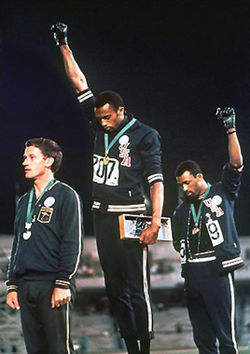 in that case the world was watching.  Here Tim Thomas swung and missed, or should I say he let one go right through the five hole… Especially when he states, “This is the only public statement I will be making on this topic.”  Sorry Tim but if you want to make a real impact you should step up and face the media and explain your protest.  Let us hear your voice instead of reading a statement, IT’S YOUR RIGHT!!!

The way I look at it Tim Thomas is not disrespecting President Obama, it’s his choice.  At the end of day the goalie short-changed himself, when will he get another chance to face the President of the United States and state his opinions?  Oh well Mr Thomas, carry on….