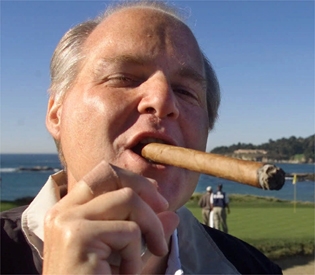 What does it say about the college co-ed Sandra Fluke, who goes before a congressional committee and essentially says that she must be paid to have sex, what does that make her? It makes her a slut, right? It makes her a prostitute. She wants to be paid to have sex. She’s having so much sex she can’t afford the contraception. She wants you and me and the taxpayers to pay her to have sex. What does that make us? We’re the pimps…. The johns? We would be the johns? No! We’re not the johns…Yeah, that’s right. Pimp’s not the right word. Okay, so she’s not a slut. She’s “round heeled.”

Folks, do you realize that you can get, in Washington, DC…? If you ask the Department of Health there, they will send you free condoms! They will send you free condoms. You don’t have to get Nancy Pelosi and ask for thousands of dollars in free birth control pills, and they’ll even throw in the lube! So, if we’re gonna sit here, and if we’re gonna have a part in this, then we want something in return, Ms. Fluke: And that would be the videos of all this sex posted online so we can see what we are getting for our money…. – Rush Limbaugh

The idea that there is a witch hunt for Rush Limbaugh after his relentless attack of Sandra Fluke is absurd. For 3 days on his radio show he went after Sandra Fluke…

Limbaugh’s attack was disgusting and vile! If there was a witch hunt it was Limbaugh going after Fluke. Let’s remember folks, Limbaugh didn’t just crack silly joke. He referred to Fluke as a “prostitute” and suggested if she wants taxpayers to pay for her contraception then she should make sex tapes for the taxpayers.

For far too long Rush has gotten away with this behavior; it looks like it may have finally caught up to him.  Over the last couple of days Rush has lost sponsors for his radio show and now those on the right want to cry foul.  Instead of doing the right thing and denouncing Rush’s statements Conservative pundits are trying to defend Rush by saying the left is on a “witch hunt” for Limbaugh.  I can’t lie I have heard and read Liberal/Progressive pundits say some hateful things and I have managed to call those folks out (via twitter).

Unfortunately the GOP front-runner is to chicken shit to step up and call out Rush for his hideous comments.  Mitt Romney talks about standing up to Iran, but he can’t even stand up to Rush and his dittoheads…. WTF!!!

If Romney wants to show leadership, he should start by standing up to his own party.  Last night Mitt talked about President Obama being too worried about saving his job to do anything bold.  Well Mitt’s silence on Rush is a clear sign he is too scared/worried about winning the nomination to step up show the “leadership” he likes to talk about in his stump speeches.