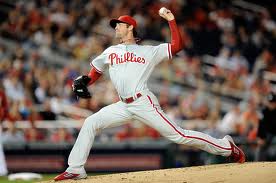 So this might be the 1st and last time I EVER give a Philadelphia Philly any credit.

As a Mets fan I hate the Phillies, not as much as I hate the Yankees but it’s still hate!

But I have to give props to Phillies pitcher Cole Hamels for taking it back to the old school; it was just the other day that I was watching the Colorado Rockies playing the Mets and the Rockies center fielder Dexter Fowler (who is not that good) hit a homerun.  Instead of just taking his victory lap, Fowler had to add a bat flip to homerun trot.  I explained to my friend that you just don’t do that, and back in the day either Fowler would be intentional hit by the pitcher or the teams best player would be hit.

It’s about playing the game the RIGHT way…..

So when Cole Hamels hit Washington Nationals young phenom Bryce Harper in the 1st inning Sunday, I have to admit I could appreciate the way Cole Hamels is playing the game.

“That’s something I grew up watching, that’s kind of what happened. So I’m just trying to continue the old baseball because I think some people are kind of getting away from it. I remember when I was a rookie the strike zone was really, really small and you didn’t say anything because that’s the way baseball is…”  – Cole Hamels

Hamels was well aware of the situation as he did it on national TV (ESPN); Harper is a phenom that has been talked about ever since he was drafted by the Nationals.  Harper has a reputation for being cocky and without a doubt Hamels knew this.

Also credit to Bryce Harper as he took the beaning in stride, I would not have been shocked if Harper had rushed the mound to get at Hamels.  Instead Harper took his base and even score as he stole home on Hamels; again playing the game the right way.

Good job by Hamels and Harper!!