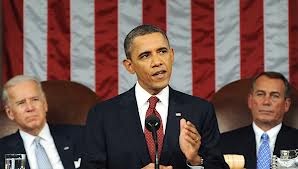 When President Obama gives the State of the Union on Tuesday, he will have the challenge of trying to get his 2nd term back on the right track.

With the roll out of Obamacare being a disaster and the whole, “If you like your health care plan, you can keep it,” debacle; the president’s approval numbers took a nose dive. Currently, President Obama is hovering around 46% approval, which is not that bad….

The problem is that while Obama is at 46% approval, when you ask Americans in the recent WAPO-ABC News poll about how they feel Obama is handling the economy and the direction of the country. The numbers are not good!

“Just 37% say they have either a good amount or a great deal of confidence in the president to make the right decisions for the country’s future, while 63% say they do not. Those numbers are the mirror image of what they were when he was sworn into office in 2009 and lower than at any other time the question was asked by The Washington Post and ABC News

If only 37% have confidence that President Obama will take the country in the right direction; how can the president get the people to back his strategy on eliminating the income inequality gap?

This State of the Union will have to be more than just a great oratory speech. It will need substance that President Obama will be able to building on for the next couple of weeks; the president is in need of positive momentum. Of course, the Republican House will not look to help Obama in any way.

For the president to gain the trust of the people, he will need to present a plan forward where progress can be measured. If he talks about pie-in-the-sky goals with little to no substance, there will be a collective rolling of the eyes from Americans throughout the country. The American people are ready for action, and if Obama wants to be on the right side of this debate his actions will speak louder than his words.