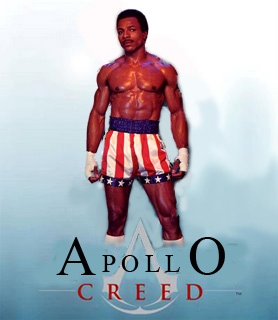 Yup I said it!

There is no Rocky without Apollo Creed, or should I say Carl Weathers!!!

Now before all the Rocky/Stallone fans get on me just hear me out; I have a perfectly good explanation behind my statement.

Stallone did a great job portraying the character Rocky Balboa; a down and out struggling club fighter that has been hit in the head one too many times.  But in order to draw the contrast between Rocky and his opponent; you need an antagonist that you love to hate and who other than Carl Weathers could have pulled that off?  Not only did Rocky’s opponent had to look the part (boxer) but he to able to act the part.

I would go as far to say that Without Weathers Rocky would not be the hit movie it was, it was the perfect combination of showing how hard work pays off and walking the thin line of America’s need of a Great White Champion.  Now before you write me off as being a racist and example of the Great White Champion theory just think back to the hype around Gerry Cooney.   Also, remember Eddie Murphy‘s Rocky bit?

With the desire to root for the underdog and you add Carl Weathers’ over the top cockiness and you got the perfect movie, and there was no one else at that time that could have pulled off that role.  Who else could have played Creed, Billy Dee Williams???

You all might be asking, why write about Carl Weathers and his impact on Rocky???  Well, recently they have been showing Rocky 1, 2, and 3 and it got me thinking how great Carl was and how Stallone really owes Weathers for his success.

So when ‘Expendables’ came out with Stallone, Schwarzenegger (who also owes Carl for ‘Predator’), and Bruce Willis where was Carl Weathers?  Where is the love???