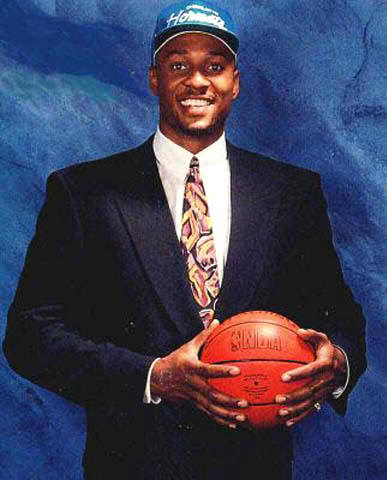 Alonzo Mourning’s induction into the Naismith Basketball Hall of Fame is well deserved and kind of brings it full circle for me as a fan of his style of play.

As a Knicks’ fan I started to follow Patrick Ewing and his career which led me back to Georgetown and that’s when I started watching Alonzo Mourning. His intensity on the court quickly made me a fan. Watching Zo wear the #33 and then finding out how he idolized Ewing, I was sold on Mourning at that point and became the biggest “Fanboy” of Mourning.  I became such a big fan that I even disliked Dikembe Mutombo when I felt like he was getting a lil bit too much shine at Georgetown.

With Mourning the Hornets became my adopted team but the Knicks’ and Patrick Ewing remained my #1 team. When the Hornets played the Knicks, it was always a double-edged sword. I wanted Mourning to get his 20 points/10 rebounds/2 or 3 blocks, BUT the Knicks had to win, HA!!

And when Mourning signed with the hated Miami Heat that philosophy continued, Zo can get his points but the Knicks had to win!

At the end of the day Mourning squeezed every bit of talent he had and left it all on the court. There may have been more talented players than Alonzo Mourning, but no one worked harder than him.

I’m trying to move on from all this Jeremy Lin craziness, but I was intrigued by Ian Begley’s interview with Lin the day after the Knicks decided not to match Houston’s offer.

What I expected was the usual talk when a beloved athlete leaves, “I love the fans” and “I wanted to play here for the rest of my career”…  Except, what I read made me look differently at what Lin might have been thinking as talks started to heated up.

“Honestly, I preferred New York,” Lin told Sports Illustrated. “But my main goal in free agency was to go to a team that had plans for me and wanted me. I wanted to have fun playing basketball. … Now I’m definitely relieved.”

2 things stand out with what Lin said; “my main goal in free agency was to go to a team that had plans for me and wanted me”.

Lin told SI that he met with Mike Woodson in late June and said that Woodson talked about Lin being the starter and being a big part of the team.  Lin also stated that Dolan told him before Game 5 versus the Miami Heat,

“I have plans for you in the future,”

“This is a long-term investment. Don’t rush back (referring to Lin returning from knee injury).” – James Dolan

All Lin talks about is how he loved the NY fans and that he preferred playing in NYC, so if you’re not playing in the preferred city you wanted to play in…  What exactly is he so relieved about?

After all the Linsanity and winning an Espy, could it be that Lin was feeling the pressure?  I mean at the end of the day this is still NYC, and the media here builds you up just so they can knock you down.  And with the Knicks fan base resting all their hopes and dreams on the shoulders of Lin, may be just may be basketball would not be as fun as he thought he could be.  Yes the Knicks have Amare and Melo, but it was Lin who had the Garden rocking like no other time during that EPIC 8 game winning streak.

There was no question Lin was going to sign with someone, so I just don’t get the relief he felt.  Of course I could be over analyzing this, smh.

How many more days until NFL Kickoff???

So here we go Knicks fans, tonight’s game is the 2nd test for the Knicks.  In many ways you can say that the Knicks have already shown a lot; it has been a LONG time since NY was this excited about basketball.  The Knickerbockers are 16-10 and coming off a heartbreaking defeat to the Celtics; without a doubt Amar’e Stoudemire has made an early case for MVP.  Stoudemire aka STAT (Standing Tall And Talented) set the Knicks record for 8 consecutive games scoring 30 or more points including adding his 9th straight game with a dominant performance against the Celtics.  This current streak by STAT has put him in the same company of the likes of Michael Jordan and Shaq O’Neil.

Needless to say STAT has already put his stamp on this team!

Many critics will say that during their 8 game winning streak that the Knicks have not faced quality opponents; while this is true you have to keep in mind where this organization has come from.  For TRUE Knicks fans no matter the quality of the opponents we know that the games we have won during this winning streak would not have been possible a year ago.  Even with the loss Wednesday night against the Celtics the Knicks have put an early stamp on the season; just ask the Celtics if they think the Knicks are for real.  Actually the Celts may not publicly say anything but the look on Paul Pierce’s face when Amar’e hit what was thought to be the game winning shot was priceless!

But enough of the Knicks losing to the Celtics… I will give the Knicks credit for giving the Celtics a run for their money but that’s it!  At the end of the day a loss is a loss and tonight we have the Heat and LeBron; no disrespect to Dwayne Wade but Bron will be the focus of NY fans tonight.  I expect tons of booing and unlike his past performances at the Garden when he was with the Cavs their will not be any cheering moments by Knicks fans for Bron Bron.  If the Knickerbockers REALLY want to show NYC and the rest of the NBA that they mean business they must win tonight!!!

There will be no moral victories!!!!

Against the Celtics the Knicks were able to hang and at times control the game; the Heat are not as good (team wise) as the Celtics so YES I am expecting the Knicks to win tonight.  Good teams bounce back and win these games, a win tonight will show that this Knicks team is more than just a .500 or barely above .500 team.

What I will be watching tonight is how the Knicks manage to play when Amar’e is not on the court; against the Celtics his absence was a problem as the team lost its way.  In my opinion this is the reason the Knicks need a solid 2nd scoring option, now is that player Melo???  That is still to be determined….

As we all know by now, LeBron James returned to Cleveland for the first game since last year’s embarrassing playoff performance.  There was much talk about the reception James would receive from the Cavs fans and for the most part they lived up to expectations.  All types of chants of “Scottie Pippen” and “Akron Hates You” rain down on the former King Cavalier.  With all the boos and jeers LeBron calmly knocked down his first jumper and from that point on the King once again ruled the court.

By the end of the 3rd quarter the occupants of the Quicken Loans Arena were all WITNESSES; the boos that were once defeating at the beginning of the game continued but at a much lower level.  As the Cavs played the role of court jester in King James Court I recalled comments made by Charles Barkley and Kenny Smith before the game; they made reference to that LeBron’s leaving Cavs for the Heat was basically a statement against his former Cavs teammates.  In simple terms, James was saying they were not good enough for him to win a championship.  I remember thinking that was a pretty harsh statement, but at the same time that it has some truth to it… also I was wondering how his ex mates felt about that.
WELL……
By the end of the 3rd there was no doubt in my mind about Kenny and Charles statement; THE CAVS WERE NOT AND STILL NOT GOOD ENOUGH TO HELP JAMES WIN!!!
It wasn’t just the bad play of the Cavs, because there is some talent on that team.  It was the poor attitudes those players took to the court; there is nothing wrong with players being friends off the court but when you are competing… all that friendship stuff is left in the locker room.  These kats on the Cavs have no heart, they let James come to their house and act like it was his crib and they were only renters.
If you’re a Cavs player how are you going to sit there and yuck it up with Bron during timeouts and free throws?  These bum ass player let Bron stand in front of their bench and chat them up.  At times Booby Gibson looked more like a fan than a ball player on a team getting their asses handed to them.  Cavs fans need to stop putting all the blame on James for not taking them to the promise land and they better look at them cornballs currently playing for them.
Cavs players need to take a lesson from Joakim Noah; there is no way Noah would have taken that sh*t from James; he already let the King know he is not a servant in the King’s Court.  I hope Byron Scott will sit those players down and have a long conversation and let them know, at some point one of them kats should have stood up and told James to STFU and get away from their bench.
And I refuse to give Mo Williams any respect for the cold shoulder he gave Bron during warmups…
Really Mo???  You did all that and tweeted all that trash before the game and turned around a laid an egg!  Plus Mo looked like a woman scorned, LOL!!!
As always….