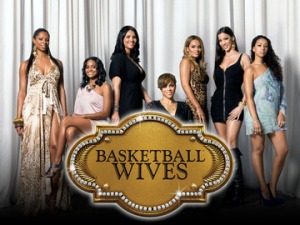 I will admit I have some of the weirdest guilty pleasures when it comes to TV shows (Sarah Palin’s Alaska, The Hills etc..), but this Coonfest called ‘Basketball Wives’ is out of control.  The foolishness I witnessed tonight leaves me shaking my head; why is anyone following these irrelevant chicks?

Maybe I just caught one of the more extreme episodes tonight but these chicks are bugging; this whole ‘Basketball Wives’ thing is like a club filled with emotionally broke broads.  If all the episodes are like the one that aired Sunday night, the image of the Black woman has been set back by this train wreck.

In this last episode the absurdity of these broads reached epic proportions when Tami Roman (ex-wife of Kenny Anderson) attends the charity event of Ashley (baby mama of Rafer Alston) and apparently have one too many drinks.  Actually Tami admits she is drunk and that when she is drunk she doesn’t know how to act; NO SH*T!!!  While Tami proceeds to get her drink on she begins questioning Ashley about who her man is and why he is not at the event; you can see how uncomfortable the line of questioning made Ashley feel, but that was only the beginning.

The fireworks really begin when Jennifer (ex-wife of Eric Williams) and Evelyn (ex-finance of Antonie Walker) show up to the event uninvited; there grand entrance immediately causes friction but not the friction you would expect from uninvited guests.  Drunk ass Tami decided it was her place to explain to Jennifer and Evelyn why Ashley did not invite them; as Tami explained that Ashley did not have a great first impression of Jennifer.  Tami then mentions that she also felt that Jennifer rubbed her the wrong way the first time they met.

Wasted Tami then argues with Jennifer about her uppity ways and from there the argument turns into a stereotypical finger snapping neck rolling hood rat fest.  Well, there really wasn’t any finger snapping but there was a lot of yelling and a lot of “Bitch” this and “Bitch” that.  No actually punches were thrown and no ones weave was ruined, but wasted ass Tami was thrown out of the event.

I get it, we all enjoy watching nonsense like this but these broads are too much and now I am drawn into their insanity.

So next week we get to watch Tami have liposuction done on her big ass, what is it with her and her weight?  Back in the day her dumbass had her mouth wired shut to lose weight (Real World)!

For the record this is not a Freestyle as a true freestyle is “off the top of the head” / improvised; in the defense of Lady Jazz she never states in the video that this is a freestyle.

Now that I got that out-of-the-way, Lady Jazz is the 14-year-old daughter of former NBA star Kenny Anderson and Tami Roman of VH1’s Basketball Wives.  I have no hate for Lady Jazz and let me say that her little rhyme is cool, I wish her nothing but the best and we will see how this video will jump-start her rap career.  It also doesn’t hurt that her mom is on VH1’s Basketball Wives so she will have a bunch of opportunities to crack the lady MC game in rap.  This might be the right time for Lady Jazz as Nikki Minaj and Willow Smith seem to be pumping fresh blood in the music game for the ladies; only time will tell…

For those of you who don’t know Tami Roman, she once participated on MTV’s Real World.  She is famously remembered for a controversial moment on the show when she had fellow Real World roommate David Edwards kicked off the show…