Republicans’ Open Letter to Iran informing them that they can change any deal President Obama makes concerning the nuclear negotiations, was not cool but it’s not an act of treason! 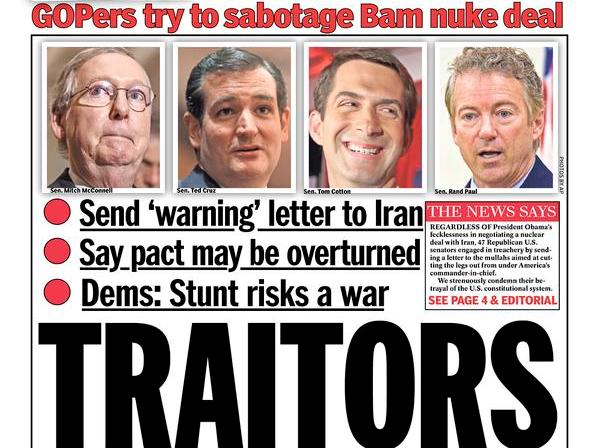 Then Vice-President Joe Biden chimed in with the following

In thirty-six years in the United States Senate, I cannot recall another instance in which Senators wrote directly to advise another country—much less a longtime foreign adversary

Wasn’t it 2007 when Representative Nancy Pelosi took a trip to Syria to sit down with Syrian President Bashar Assad? A trip that the Bush Administration advised against as they were in the middle of trying to punish Assad for Syria’s role in sending insurgents to Iraq.

Come on Joe, a bit of selective memory there.

While I believe Senator Tom Cotton’s Open Letter (signed by 46-Senate Republicans) was a bad idea and it shows the world how dysfunctional the US is right now. It doesn’t deserve the verbal bombs being thrown at Republicans lobbed by Liberals, relax.

If there is anything that Republicans’ like Cotton should be hammered for is that they have no plan on how to handle Iran except for regime change, aka US invading Iran.

It will not be enough to just bomb Iran’s nuclear sites as that will only delay and more than likely embolden the Iranians to move forward with nuclear. Let’s not put the cart before the horse and confirm the details of a possible deal, as the president stated; no deal is better than a bad deal.